Ginger Scott studied religion at Randolph-Macon Woman’s College, then worked as an educational assistant at a South Carolina church. She returned to Richmond in 1959 to attend Presbyterian School of Christian Education (PSCE). As a PSCE student, Ginger realized that gifts from many Presbyterians kept her class fees low. That realization is the fundamental reason she and her husband Tom continue to support Union today.

Ginger explained her view: “Christian education is more and more important as the church interprets itself to its surrounding community. It’s exciting to see programs which bring parishioners, old and young, into cooperative efforts to meet the needs of its neighbors.”

After “running the numbers,” Tom and Ginger found that their income taxes were somewhat lower when making a gift directly from an IRA. This is because – as part of a minimum required distribution – a qualified charitable distribution (QCD) can be made to a 501c(3) organization such as Union to reduce dollar for dollar one’s adjusted gross income (AGI). A lower AGI determines how much Social Security income is taxed, as well as the percentage by which other itemized deductions are reduced.

If you’re considering using an IRA to make a tax-wise gift to Union, we would be happy to talk to you about it. 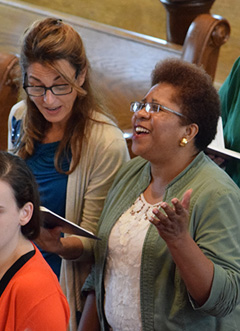